“Art was at a high level and living was very difficult,” she says of Black Mountain College. “We lived in crude beds and we were so poor we had to scrounge around with leaves and rocks. We were forced to go back to natural things rather than having good paper and good materials that we bought and I think that was very good for us.” 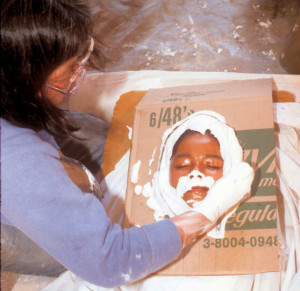 Asawa started casting faces in 1965 after she learned the technique from a public school art teacher. She cast the faces of hundreds of people, doing it so often that she kept a 25 lb. sack of plaster of Paris in her kitchen, right next to the flour, so as to be ready when the opportunity presented itself.

First, a person would have to cover her face and hairline in a thick coating of Vaseline. Then Ruth would cut out a cardboard pattern to fit the outline of her face using a matte knife. The person would lie on the kitchen table or floor with a sheet protecting her clothes. The cardboard template would act as the base for the plaster mold. Ruth mixed the plaster, and then told the person to close her eyes. She first put a  thin layer of plaster delicately all around the face, chin, and hairline. As the plaster began to set, she added layers to strengthen the mold. After 5-8 minutes, she would remove the plaster mold and set it aside to let it harden completely. The model would have to comb bits of plaster and vaseline out of her eyebrows, eyelashes, and hairline. It was messy.

The next day, Asawa would press clay into the mold to create the positive ceramic mask which was dried and later fired in a kiln which she kept in her garage. She left behind a personal collection of more than 300 masks, and gave hundreds away in her lifetime. When asked why she was so keen to take the impressions of people’s faces she replied:

“The moment that I caught . . . is what I like about casting faces. I don’t care about making that a technique. But I like the idea of stopping the moment in time. And it’s going to disappear.”

Many of Asawa’s masks have found a home at Stanford’s Cantor Arts Center. Learn more and visit >

Learn about her work in schools >